The history of Regent’s Park College as an institution begins in 1810, when a wealthy benefactor purchased a property in Stepney Green, East London, and the Stepney Academy was launched. But the story really starts several decades earlier.

This was a time when ‘Dissenters’ or Nonconformists were unable to take degrees from Oxford or Cambridge (the only English universities) unless they signed up to the doctrines of the Church of England.  Baptists were among those who responded by developing their own patterns of education, and a Baptist Education Society was established in 1752, followed by another in 1804, to provide an education for Baptist ministers.  Out of these emerged Stepney Academy.

By the middle of the nineteenth century, the College was part of the new and radical London University, able to offer London degrees.  At this time, it also began to take a wider group of students and offered Arts degrees to those ‘Dissenters’ still unable to access Oxford and Cambridge, who wanted to pursue professional careers.  But concerns were expressed both about the buildings and whether Stepney itself was a healthy place to live; and, so, in 1856 the College took a lease on what had been a large private house in Regent’s Park, and adopted its current name.

After the First World War, during which the College buildings were requisitioned, with the lease on Regent’s Park nearing its end and London University becoming more centralised, the decision was taken to look for a third home outside of London.  Initially, Cambridge was favoured and the College almost moved there in 1922, but plans fell through; instead, five years later the current site, then two houses a garden, plus assorted cottages and garages, was purchased and building work began in 1938.  The College tutors taught in the Theology Faculty and the buildings were used for University events, but the students had to be matriculated through St Catherine’s Society.  Finally, in 1957 the College applied for and was given the status of a Permanent Private Hall (PPH), fully part of the wider University.

The College’s student body (around two hundred) is now the most diverse it has ever been: around one hundred undergraduates study in a cluster of subjects that focus on Humanities and the Social Sciences; fifty or so graduates study a wide of subjects and courses; in addition, we welcome around twenty visiting students a year from abroad.  All those admitted for Certificates, Diplomas and Degrees are full members of the University having access to all its rich resources, academic, sporting, cultural and social.

Preparing Baptist ministers and serving the Baptist churches, the original vision of the College, also remain a central part of its life. There is a cohort of about twenty ministerial students in the College, which is also home to the internationally important and unique Angus Library and Archive, comprising over seventy thousand printed books, pamphlets, journals and other artefacts from the history of Baptists and nonconformists in Britain and the wider world, from the late fifteenth century to the present day.  Various training is also delivered out of the College among local churches.  Seeking to make connections between theology and other subjects in the academy, and between faith and society are particular strengths of the College, which it does partly through its two centres: The Oxford Centre for Christianity and Culture and the Oxford Centre for Baptist History and Heritage.

Located at the heart of the city and fully part of the University, developing community, encouraging education and being a place where all can flourish are hallmarks of both the College’s history and contemporary life.

The recent history of the College, Dissenting Spirit: A History of Regents Park College 1752-2017, co-authored by Anthony J. Clarke and Paul S. Fiddes, can be purchased through the Development Office. 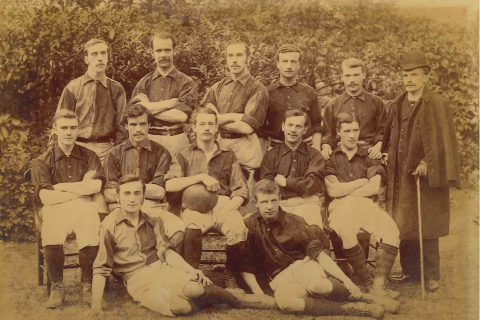