Announcing the winners of the Oxford-BNU Creative Writing Award 2021

Announcing the winners of the Oxford-BNU Creative Writing Award 2021 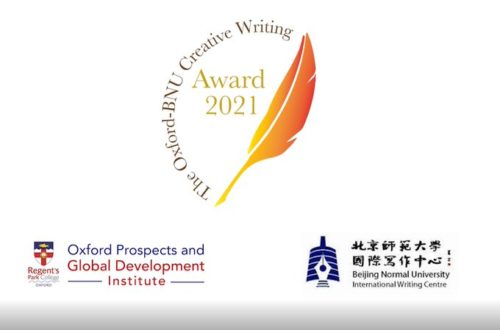 The winners of the Oxford-BNU Creative Writing Award were announced at a formal ceremony held at Regent’s Park College, on 26th November. Organised by the Oxford Prospects and Global Development Institute (OPGDI), Regent’s Park College, and launched in June 2021, this inaugural year’s competition for a short story attracted 70 entries from undergraduates and postgraduates across the University’s colleges and disciplines, eliciting winners from Somerville, Corpus Christi, Keble, Kellogg, St John’s and Trinity.

Welcoming attendees to this unique event, Regent’s Park College Interim Principal Elizabeth Crawford highlighted the innovative partnership with Beijing Normal University. OPGDI’s Director, Dr Shidong Wang, recalled the Award’s origins in a conversation with 2012 Nobel Prize Winner in Literature Mo Yan during his June 2019 visit to Oxford, when he opened the Mo Yan International Writing Centre and became a Regent’s Park College Honorary Fellow – generating this parallel competition taking place in two languages and two countries, amongst the students of two universities. Mo Yan extended his congratulations to the 22 shortlisted authors, ‘confident that this Award will nourish the field of literary creation’ with ‘excellent works produced to enrich our world’s literary treasure house.’

Speaking collectively for judges Liz Trubridge (Executive Producer of Downton Abbey), Lynn Robson and Davis Bunn (both of Regent’s Park College), UK Judging Panel Chair Boyd Tonkin (FRSL and Chair of the Judging Panel of the Man Booker International Prize 2016) praised the competition shortlist as ‘an entire, broad landscape of fiction packed into a very well-tended garden,’ with pieces of fiction which ‘roamed so freely around different genres, voices and registers.’ The authors, he said ‘were bold. They were inventive. They took risks. They bent rules. They showed that fiction, even short fiction, really is a garden where a hundred flowers can bloom.’

1st Prize was awarded to Megan Chester of Somerville College (MSt Creative Writing, 2020) for her work ‘Girl, Woman, River’. Speaking about what this prize means to her, Megan said:

‘Winning the inaugural Oxford-BNU Award for Creative Writing came as a wonderful surprise and a timely encouragement! I believe that there is a place for women in sports literature, and it is affirming to now know that others agree with me.

It was a joy to write about nature, landscape, belief in God, and sport. I find that these things are intimately connected and bring me life. I hope that these stories provide similar life for readers and that they inspire women and girls to have the confidence to enjoy sport.

This award is a blessing, and I am very thankful.’

The Oxford-BNU Creative Writing Award is the latest initiative in OPGDI’s ongoing project ‘Performing Literatures and Cultures: The Humanities in a Global Context’, and looks forward to continuing as an annual fixture on Oxford’s rich literary calendar. 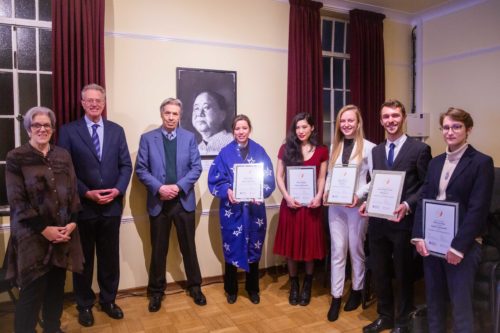 Runner Up Prizes awarded to Rowan James Curtis of Trinity College for ‘The Most Beautiful Ship in the World’ and Ellen Taylor of St John’s College for ‘Stella Polaris’.

High Commendations were also awarded to Emma Latham of Keble College for ‘The Anatomical Venus’, Joanne Szilagyi of Kellogg College for ‘An Invented Account of the Near-Death, Life and Death of Leslie Kong’, and Sofia Vaz Pinto of Corpus Christi College for ‘The Lake’.

The winning short stories will be published by The Oxford Prospects and Global Development Institute.