We are very sad to announce that Emmanuelle, the College’s much loved tortoise, has died

Home  /  Uncategorised  /  About Regent’s  /  News  /  We are very sad to announce that Emmanuelle, the College’s much loved tortoise, has died

We are very sad to announce that Emmanuelle, the College’s much loved tortoise, has died

After struggling over the past year from multiple conditions relating to her old age, Emmanuelle died peacefully over the weekend. Our Chaplain was with her, and we are deeply grateful for the excellent care she received from Iffley Road Vets, who gave her round the clock attention in the final week of her life.

Emmanuelle has been resident of our College for 46 years, having been purchased in 1976 from a pet shop in Oxford’s Covered Market. Each year she has had a birthday party with a dandelion and cucumber cake, most recently celebrating her ‘119th’ birthday party. The reality is likely to be something closer to 80-100 years old – still a very impressive age!

Originally thought to be male, she was named Immanuel, until a later health condition revealed this was not the case and led to a change in her name. In her prime she won the Corpus Christi Tortoise Race, and even starred on Nationwide and Blue Peter in the 1980s. There is an Emmanuelle Cup in our College Archive which honours her lifetime service to the fine Oxford tradition of intercollegiate tortoise racing. Most recently, she was immortalised in our Chapel’s new stained glass windows.

As well as a delightful pet, ‘Manny’ has been a symbol of our community life. There was always a feeling that she belonged to everyone in the College, but she in turn also created a sense of belonging: gathering groups around her and creating friendships through cross sections of the College, both past and present.  She was a full member of the JCR, with the annually elected position of ‘Tortoise Keeper’ being the most hotly contested role amongst student representatives!

We want to note our gratitude to all the staff and Tortoise Keepers over the years who have given their time and care to her – as well as reserving the tastiest portions of the salad from lunch. 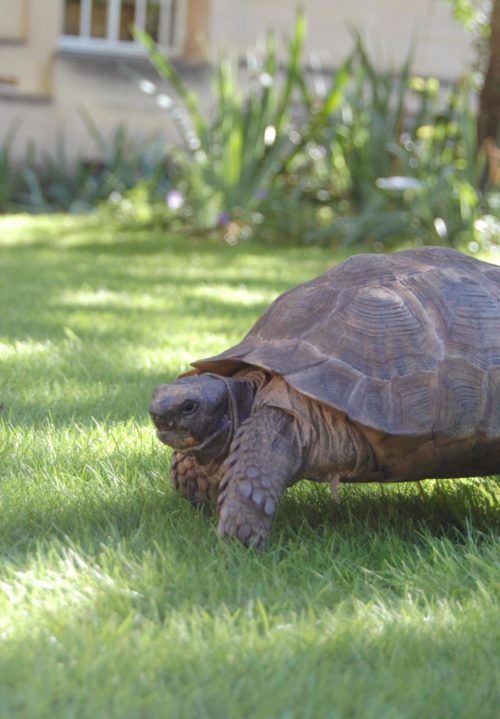